Choices and Consequences (or, as some hardcore RPG gamers refer to it, “C&C”) – the ability for a game to change in response to a player’s decisions. It’s something that’s bandied about quite a lot among players of Western RPGs, and something that AAA studios such as Bioware, Obsidian or Bethesda tout as a core philosophy of RPG design. 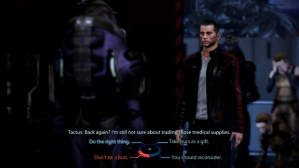 It’s a concept that has been in the forefront of my mind during the development of Heroes of Legionwood, and one of my main goals — at least in regards to introducing cRPG elements into the Legionwood formula — is to make the player feel as if their choices really count. I previously experimented with this concept in Mythos: The Beginning (and Legionwood 2 to a lesser extent, where your choices culminated in the ending you received) and I’ve since come to realise that meaningful choices are, logically, the core of a good role playing game; a game world that actually reacts to your character – reacts to the role you’re playing.

Here’s an example of one choice in Heroes of Legionwood from late in Act 1:

The party needs a Dynastland Gem to divine the location of a plot mcguffin. You have two potential ways to get one – you can plunder the nearby ruins for one, or you can steal one from the local tyrant’s collection. There are several basic differences between the two options. Raiding the tyrant’s house is the “easy” option, resulting in an easier boss fight and a handful of powerful Runecrafts. Plundering the ruins is the “hard” option, containing less valuable treasures, a much more complex dungeon to go through and a more difficult boss.

It sounds pretty simple, but – unknown to the player – there are actually consequences to this decision. Taking the “easy” route seems to be the obvious option, but it turns out the tyrant the party is stealing from is actually a powerful associate of a group out to destroy the party – this choice ultimately results in drawing the ire of the tyrant’s allies, which will create complications later on in Act 2 when visiting the home-city of the group. Meanwhile, the “harder” option yields less immediate rewards, but prevents the player from making an enemy who will try to foil them throughout the rest of the game.

As if that’s not all, the player’s party is essentially torn by this decision – half of them would prefer to steal the gem, while the other half consider the ruins a “safer” option. No matter which choice you make as the player, you risk alienating your companions, potentially ruining a useful alliance or shutting off a romance. The seemingly simple decision of where to procure a gem ends up having consequences that may significantly affect the course of the game.

There are a few such decisions to make throughout Heroes of Legionwood, with the general idea that, while it’s impossible for a lone developer to make something on par with Mass Effect, there are enough meaningful “big” decisions that different players will experience the game’s events in significantly different ways.

How do you feel about Choices and Consequences?

Indie game developer and writer. Founder of Dark Gaia Studios and creator of Legionwood, One Night and Mythos: The Beginning.
View all posts by dgrixti →
This entry was posted in Games, Writing and tagged artistic license, c&c, gamedev, legionwood, rpg. Bookmark the permalink.
%d bloggers like this: