So… with Heroes of Legionwood progressing at a nice rate, and release day drawing ever nearer, it’s time to explain something that has been on many people’s minds.

You should have noticed by now that the game’s official title is Heroes of Legionwood: Act 1. It’s been pretty clear from the start that Heroes of Legionwood is an episodic game, but a lot of people have asked me to clarify what, exactly, that means.

Am I asking you guys to pay for an incomplete game? Well, yes… and no. Heroes of Legionwood: Act 1 is the first installment in a three part saga. It’s incomplete in the sense that — in a similar vein to Telltale’s The Walking Dead — you won’t get to see the entire story unless you take a character through all three episodes. Despite that, however, my plan is that each episode of Heroes of Legionwood will be able to stand on their own as complete adventures. For $5.99, you’re getting a sizable 5-6 hour long mini-RPG, with multiple quest paths and an ending that (while not resolving the main conflict) gives you a sense of closure. 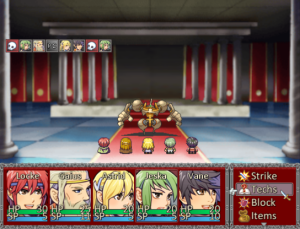 The idea is that you’re free to buy any or all of the three games in the saga and still be able to feel that you’ve purchased a complete game. You’ll be free to start in Act 1 and take your character through all three episodes, experiencing the story from beginning to end, or you can choose to start off in Act 2 with a new character, or just choose not to play any of the future episodes at all. Decisions you make in earlier episodes will carry over into subsequent ones, but if you never played the earlier episodes, you’ll still be able to choose from pre-set (or randomly chosen) histories for your character.

There are at least two other commercial RPG Maker games (that I know of) that use this model: Aldorlea’s Millennium and Amaranth’s Aveyond 3, which are split into six and four episodes, respectively. Furthermore, you can buy each and any of the installments of these games and each one is capable of standing on its own. In this sense, Heroes of Legionwood isn’t doing anything new and unheard of. The best part of doing an episodic game is that the development cycle isn’t nearly as long as it would have been, which is the main reason why I’ve decided to release Heroes of Legionwood in this way – considering that the first two Legionwood games took nearly 3 years each to complete, releasing the entire game at once just wouldn’t be viable business-wise. It’s much better to release three smaller games every few months instead.

So, that’s about it, really. Now you know how Heroes of Legionwood‘s episodic release is structured and how the three episodes interact with each other. My hope is that this will allow me to bring more Legionwood to you guys sooner and that it will give me the time and freedom to flesh out each part of the game much more than I would have otherwise had a chance to.

Indie game developer and writer. Founder of Dark Gaia Studios and creator of Legionwood, One Night and Mythos: The Beginning.
View all posts by dgrixti →
This entry was posted in Games and tagged gamedev, games, legionwood, writing. Bookmark the permalink.
%d bloggers like this: