Well, it’s been about a week since the public demo of Mythos: The Beginning went online, and in that time I’ve received from pretty good feedback on which direction the game should take.

A hot topic that’s been brought up a few times (and something that seems to be an issue with games I make in general) is the game’s difficulty — namely, that the fights are pretty damn hard. As such, I’m currently taking the time to go through what I’ve made of Mythos so far with an eye to re balancing the combat difficulty and making the Easy Mode toggle actually affect the stats of enemies. 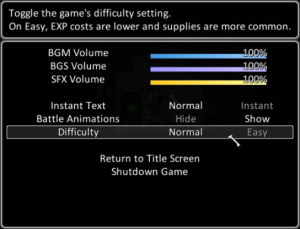 Easy Mode will tone down the game’s survival elements.

First of all, I should point out that, just like in the Legionwood series, the unforgiving difficulty of Mythos is a conscious design choice, for several reasons. Mythos is unique among my games in that it’s both an RPG — one that’s inspired by old-school tabletop games, at that — and a survival horror game. I believe that in a horror game, the enemies should be a threat. Players should be scared of them. If they’re lucky and play smart, they might be able to kill a few, but they should definitely end up dead if they try to take on all the enemies head on. Furthermore, the combat, being based on tabletop RPGs, is resolved through dice rolls, leaving a lot to chance and making unlucky deaths rather common. My goal with the combat in Mythos is to make it fast and ferocious, giving the player a sense that they’re underpowered.

However, with the feedback received from the demo in mind, I’ve actually come to realise that many people who’ve played the game so far don’t actually have a lot of prior experience with survival horror games. Because Mythos is an RPG and not just a horror adventure game, a large portion of its players are RPG fans that haven’t played a survival horror game before. For these people, it’s quite a shock that any random enemy in Mythos can destroy the player character relatively easily.

So, how will I deal with this problem? It’s simple. Mythos currently has an Easy Mode that can be toggled from the Config menu. At the moment, this only affects the cost of EXP upgrades and makes health items more common, but I’m going to spend a significant amount of time expanding it to affect combat, as well. There will be two sets of enemies in Mythos — one for each difficulty mode — and Easy Mode will make the monsters a lot less ferocious.

The idea is that, with Easy Mode on, the game will shift focus a little. Instead of being a survival horror game with RPG elements, it will become more of a straight-forward RPG. It will be possible to fight all of the enemies and grow steadily more powerful, just like in a normal RPG. In that sense, “Easy Mode” is probably a misnomer. Mythos isn’t just about combat, and the game will still be a challenge, even if the monsters are a pushover. It’ll just become a… different game, in a sense.

Hopefully this will enable players of all skill levels to enjoy Mythos. We’ll have to wait and see.

Not a gaming fan? Don’t worry — I’m still working on my next novel. You can check out a preview here.

Indie game developer and writer. Founder of Dark Gaia Studios and creator of Legionwood, One Night and Mythos: The Beginning.
View all posts by dgrixti →
This entry was posted in Games and tagged gamedev, games, horror game, rpg maker. Bookmark the permalink.