Hey, guess what, everyone? It’s that time again — you know, when I go and review indie horror games from the internet. With the release of Sun Bleached Winter out of the way (for now — paperbacks are on sale next week), and review copies safely sent off, I’ve been left with a quiet email inbox for the time being, and a chance to sit down and enjoy myself. I figured I haven’t done a gaming review in a while and so I decided to use my time by re-playing a little gem of an adventure game I dug up back when I frequented the RPG Maker fan-sites. Now, I understand that the majority of my readers are only here for the books/writing related content, but I am an indie game developer (or was) in addition to my literary pursuits, and I felt I’ve been neglecting that side of my fan base recently.

So, this week, we have The Ravenwood Horror (free download here), a horror themed adventure game (but not a survival horror — an important distinction to make) made with the ever-ready RPG Maker VX engine. It’s not quite in the same league as the current trending RPG Maker games, namely Ao Oni and Ib (one of which I’ve reviewed previously), but if you enjoy the nice, slow pace of an adventure game and you’re looking for an hour or two of some traditional Gothic horror, Ravenwood Horror might just fit the bill. It’ll provide you with a good amount of decently challenging puzzles to solve and a well crafted mystery to unravel. 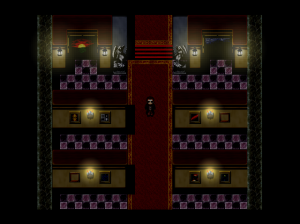 The Ravenwood Horror starts with your character coming to in a dark stone room lit by torches and covered in bloodstains. You cannot remember who you are, where you are, or what has happened to you. Seeking the answers to your questions, you get up and leave the room, and find yourself trapped in an old abandoned mansion where something has gone terribly wrong. For the most part, there’s a genuine sense of menace and intrigue that keeps you going, though the game does regrettably throw a few Gothic horror cliches at you towards the end. However, the story does change slightly according to your actions, and there are multiple endings to enjoy at the end of the game (a mechanic that seems to have helped make Ib so popular), so there is still an incentive to see it through to the conclusion, and it is fun anticipating whether your actions will land you with a good outcome or a bad one.

You should note earlier in this blog post how I said that Ravenwood isn’t a survival horror game. Well, that’s true. It definitely doesn’t have the survival elements of something like Resident Evil or my own One Night games, and it lacks even the simple chase scenes that push Ao Oni loosely (but unmistakably) into survival horror territory. Instead, The Ravenwood Horror plays more like a simple adventure game, in the vein of something like Yahtzee Croshaw’s Chzo Mythos or Myst. The gameplay mainly involves solving logic puzzles and collecting clues and key items, as well as navigating the fairly large mansion area. There are a scant few sections in the game (no more than two, if I remember) where you can trigger a game over, namely by failing to dodge an incoming monster or using the wrong puzzle item at the wrong time, but there isn’t any combat in the game and there isn’t anything that actively tries to hurt you. Fans of survival horror games probably won’t get much out of Ravenwood, but if you’re more of an adventure gamer, there’s enough to keep you busy, and there are a few good creepy moments (though never actually scary — at least to me) to enjoy.

If you’ve got the time, and you’re willing to keep the RPG Maker indie horror game craze kicking just a little longer, go and check The Ravenwood Horror out. It’s not as popular as Ao Oni or Ib, and I don’t really see it going viral like they have any time soon, but if you enjoyed those games, you’ll probably like this one, too. I first played it when it came out a few years ago, and it was still enjoyable to play through again today.

Do you have anything else to add, or another game/book for me to review? Leave it in the comments! Next week, I’ll be back to my usual writing oriented posts, starting with an article on how to write good leads. Stay tuned!

Indie game developer and writer. Founder of Dark Gaia Studios and creator of Legionwood, One Night and Mythos: The Beginning.
View all posts by dgrixti →
This entry was posted in Games and tagged gaming, horror, puzzles, reviews, rpg maker. Bookmark the permalink.